Zammis Clark, a 24-year old security researcher, had access to all of Nintendo's files from mid-March to late-May of 2018. After going through the file server and getting everything he wanted (including Software Development Kits, unreleased titles and source code for popular titles), different things were sent to different individuals (likely all of them being in the SUXXORS scene release group) in May of 2018. The damages that Nintendo estimates are between 700K euros and 1.4 million euros. However, despite his pleading in court as guilty, this hasn't stopped his friends from leaking these files to the public themselves. Within one of the latest leaks, it was revealed that Nintendo was once contracting hackers by visiting them in person, something I consider to be a privacy breach.

In 2012, Nintendo setup a meeting with neimod, a hacker for the Nintendo 3DS handheld device. In the meeting, they persuaded him to distance himself from hacking Nintendo system/products and to join Nintendo. But how did they get the information necessary to set up the meeting? Instead of setting up the email via an IRC chatbox or email, it was revealed through the leaked documents that the Nintendo Ninjas has been stocking neimod, documenting all his personal information including his home address and personal activities. They even found it worthy to note that he goes to restaurants alone, in an absolute savage move. This was all done to find the proper time for said meeting, yet the same effect could have been achieved via an email confrontation.

Thankfully, a former undocumented altercation was not as creepy (but still a bit creepy), being communicated to via a private work phone number as opposed to face to face. This is what happened with Ben “bushing” Byer, one of the public faces of Team Twiizers (group of hackers that discovered Wii exploits and wrote The Homebrew Channel). After trying to responsibly disclose an exploit, a former director/lawyer at Nintendo of America phoned him as a intimidatory tactic. In both of these cases, they were contacted in ways that aren't accessible to the public. Yet, what happened to going from mildly creepy to stalkery? Thankfully they fixed this in 2015 when hiring Hector Martin, yet who knows how many other hackers were contacted with similar experiences?

I have quite the experience with privacy breaches, seeing as how I acted worse than Nintendo back in April 2018. After months of trying to fix a relationship with someone (which already fell apart twice at that point), I was told to never join their group again because I was "ignoring" them. Due to being afraid of being trash-talked about behind my back in front of friends, I wanted to leave them with a warning: change or you won't find people to talk with. The warning was given in the form of a semi-private PasteBin document (due to WhatsApp's character limit), but I had included their personal information, making it seem extremely creepy. Since then, I had taken down the official PasteBin document and have no plans of reuploading it, largely due to my regret of doing those actions. I can only imagine the fear he must have gone through, worrying through the night in case anyone wanted to do physical harm to him.

The difference in the victims in the stories is while Nintendo was doing it for a confrontational purpose, I was doing it solely for antigonazing purposes. Also, the information I received was at a time when the person trusted me with the information and that trust was broken. Neimod and bushing had not provided Nintendo with any of their information, but they got it through surveilance.

In all three cases, private information was found about the victim. This is the worst case scenario, yet we approach close levels in our modern internet. Every time you visit a website, your IP is exposed. Every time you take a picture on your phone, the GPS coordinates of where the picture was taken is stored in the EXIF metadata. Platforms like TikTok and YouTube store in their databases how much you watch of a certain video. Heck, site owners even willingly sell our data to other companies to gain an extra dollar, through advertisements.

Yet, privacy isn’t really a concern in our modern day, and those of us who are concerned just have to put up with it. Anytime you even sneeze at google, they’ll update their data about you to add more food to the obese database. It’s inevitable that you’ll be forced to use privacy-leaking software either for school, work or general every-day life. Zoom has over 300 million users and their data has been leaked on the dark web for all the stalkers to start traveling across the country to spy on. Yet, schools distance from it as much as it distances from a non-social environment learning during a pandemic, which means its not distancing itself from Zoom at all.

Even then, some of us don’t even know when our data is being taken. We over react when we figure out that our favorite applications might not be as clean as it seems, yet they scream their privacy violations in a document that no one reads. One example is Wexos’ Toolbox, the tool Wii U modders used to use before Switch Toolbox came out. Multiple servers “exposed” the app sending the IP address and name of the PC to the creator, recommending people to either firewall it or uninstall it. However, if people just read privacy policies or the window that pops up when you first use the app, Wexos makes it already stated what he does; there was no need to disassemble the application.

For those of you who want to start taking a stand against your privacy, here is a list of steps I + antoine62 (a privacy advocate who demonstrated just how much information has been and could be collected about me) I made so that you can take better care of your privacy:

For those of you who are tech enthusiasts that care enough to read through these 8 pages, you would know how locked down Apple’s mobile operating system is. However, as much as I bash them and think that lockdown does not equal better security, they have been better than Google in terms of privacy. Not only do they not do as I described above, but they are advocates for user rights in regards to privacy (unfortunately, not in regards to anything else). Privacy labels are now required and prompts are now shown before any sort of tracking goes. To quote an official statement made by an apple employee:

We believe that this is a simple matter of standing up for our users. Users should know when their data is being collected and shared across other apps and websites — and they should have the choice to allow that or not. App Tracking Transparency in iOS 14 does not require Facebook to change its approach to tracking users and creating targeted advertising, it simply requires they give users a choice.

When iOS 14 was announced and open for beta testers, apps found to act invasive were leaked. TikTok, Reddit, LinkedIn amongst 53 other apps was caught being a keylogger, which means accessing the clipboard data. While LinkedIn & Reddit were quick to push a fix and get ignored, TikTok was a Chinese company and the United States was already sour from the things COVID-19 did to its economy. This prompted Donald Trump to try and ban it, which hey, isn’t a bad thing if we stop getting the cringe memes and bigotry on the platform. I’m mentioning TikTok’s issue because that was the only country which had a legitimate reason to retaliate, yet FaceBook had none. However, it was FaceBook that was trying to block this.

Full page advertisements were bought in The New York Times, The Washington Post and The Wall Street Journal with the headline of “We’re standing up to Apple for small businesses everywhere”. To quote the Electronic Frontier Foundation, “Make no mistake: this latest campaign from Facebook is one more direct attack against our privacy and, despite its slick packaging, it’s also an attack against other businesses, both large and small.” Facebook isn’t telling you the whole story; it only benefits those who already benefit from surveilance-powered advertising (so neither users or small-businesses). Facebook has been serving eerily accurate ads which mainly profit them; not the publisher of whomst they’re taking the ads from.

In the end, even Facebook’s own employee’s call this hypocritical. Apple has been praised by everyone including the EFF, and they also encourage Google to follow in their footsteps. As well as expose other apps, they’ve even cut down on the things they do themselves. Just take a look at the comparison between iMessage and FaceBook Messenger: 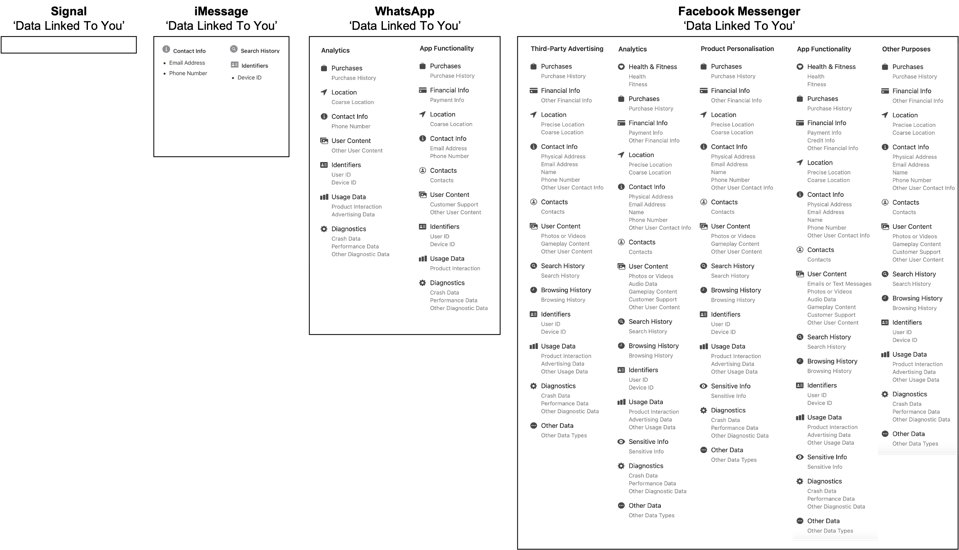 Of course, I don’t think anyone would be able to beat Signal, yet I found it amazing that iMessage could work with as little as an Apple Account and yet people still use WhatsApp. Please consider where you’re putting you’re trust; the company whos own employees call hypocrisy or someone fighting for others.

As I’ve noted in my communications section, it requires the active effort of everyone. Unfortunately, people have been relunctant to change due to it being the norm.

But does it have to be the norm? Why not fight for change? We have much more power than we think. If we stop using their application, they have a risk of falling into irrelevancy. WhatsApp is trying desperately to prove itself from their new Privacy Policy changes, as users switch to other platforms (like Signal or Telegram). They’ve clearly adapted to the concerns of its users, as the change is delayed.

In 2019, I became increasingly suspicious of a fan-game by the title of Mario Multiverse. The game was trying to write to System32 when I gave it limited permissions and detected file path changes. When I confronted neoarc about it, he said a Privacy Policy was not needed. A Privacy Policy implies strict laws of what the game can and can’t do, and the owner would be liable if it was broken. The best solution to this was to not have one, since you wouldn’t need to expose what your app did. bunten & I wrote out a PasteBin document describing our weird occurences, and it spread throughout the fangame community (largely due to it being posted on Blue Television Game’s server). Neoarc responded with finally making a Privacy Policy, debunking all the misinformation spread about the game.

There clearly is a concern and there is a listener. We just need to voice the concerns to the listener.

As we install new apps on our phones or browse new websites, keep note that you are being watched. Whether it’s your IP address, EXIF data, cookies and much more, corporations are on a hunt to make you their extra dollar. The way to solve this is if you stop feeding them. Take a stand against your privacy. Keep yourself from the exposure of others.